A brief journalistic history of the term "strategy of tension" 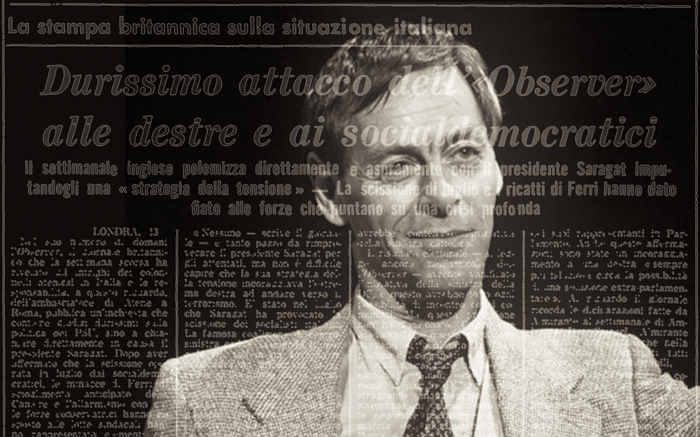 The expression strategy of tension first appeared in a British newspaper ("The Observer") on December 14th, 1969. Ascherson, Davie and Cairncross were reporting on the Piazza Fontana massacre, writing that: "Nobody is crazy enough to blame President Saragat for the bombings. But the entire Left is saying today that his 'strategy of tension' indirectly encouraged the far Right to go over to terrorism". As Neal Ascherson recalls (personal communication), the Italian journalists were eager to use the phrase, but none of them would risk taking responsibility for setting it in ink, and so they "all benevolently conspired to set me up with tales and gossip and analysis about Saragat’s 'strategy of tension'". Having convinced Ascherson they were all going to use it, "none of them wrote the story or pointed a finger at Saragat. Instead, they all sanctimoniously denounced the outrageous slander against Italy published in 'The Observer' – and thus were able to go on to print the whole 'disgraceful' text of what I had written". The very same day, the passage was translated and commented on in "Unità", the official newspaper of the Italian Communist Party (PCI), who were at pains to outsource responsibility under the headline "The Observer attacks the Socialdemocrats" (President Saragat’s Party). The anger of the Italian government was safely directed at "The Observer"’s editors, and the expression was then free to enter the Italian political lexicon, rising to become a defining term of those years, as well as of a specific strategy globally. Half a century after the act, Ascherson recalls: "You have to laugh. I do think there probably was such a strategy. But I didn’t discover it, not even the phrase. I was used, adeptly. And I don’t resent it at all".

Neal Ascherson (Edinburgh, 1932) is a Scottish journalist and essayist. He was a pupil of the historian Eric Hobsbawm who defined him as "perhaps the most brilliant student he ever had". Graduating with honors, he gave up his academic career opting for journalism by collaborating with the "Manchester Guardian", the "Scotsman", the "Observer" and the "Independent on Sunday". Recently, he collaborated with the "London Review of Books" and since 2008 he has been visiting professor at the Institute of Archeology of University College London. Finally, he was the editor of "Public Archeology", an academic publication associated with University College, dedicated to issues and developments regarding the management of cultural resources and community archeology.

We thank Hamish Kallin for having discovered, reconstructed and shared with us this historical-journalistic anecdote, a significant example of the climate of those years.