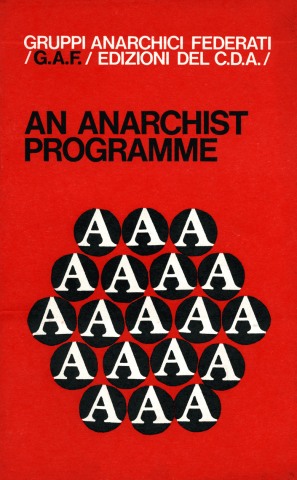 Who are the GAF? They are the smallest and youngest of the three national federations of Italian anarchist movement (the other two are FAI and GIA), formed at the end of 1965. Several months previously there had been a split in the FAI (hitherto the only national federation), giving rise to the GIA. Some autonomous groups of young libertarians, who had already collaborated together and had many ideas in common, formed a federation of their own – the Federated Young Anarchists Groups (GGAF). which subsequently became the Federated Anarchist Groups (GAF) in 1969.
Why this translation (into English, Spanish and French)? Firstly, to make ourselves known at an international level as a federation, to acquaint others with our analyses and interpretation of anarchism and with our ideas of organization. Secondly, by our example, to stimulate other anarchist and libertarian federations and organizations to do the same thing. Despite our essential internationalism, information and ideas circulate too little and with too much difficulty at an international level, precisely at a time when everything we are fighting against is taking on an increasingly international aspect.

What follows is not THE anarchist program but ONE anarchist program, that of the Federated Anarchist Groups (GAF) approved by their assembly of March 20-21, 1976.
This program is the result of ten years of joint experiences and discussions and is simply the schematically organized expression of ONE way of interpreting anarchism in Italy today and contemporary socio-economic reality, although certain theoretical assumptions as well as some of the more general aspects of the analysis will certainly have a wider validity in space and time.
Some fundamental assumptions e.g. the unchangeable nature of equalitarian and libertarian principles, the coherence between means and ends etc., are the theoretical and historical heritage of anarchism as a whole and as such are not linked to particular situations or convictions, being common to any interpretation of anarchism and therefore also to this program.
The program has a deliberately «open» character, open not only to modifications and corrections in its analyses, a natural consequence of objective structural changes and a thorough critical theoretical examination, but also to new ideas and modifications as regards the practical side for new experiments and experiences. Thus, in line with the character of the GAF, it is a program to be continually verified and periodically confirmed or rectified.